Redknapp can't wait for the window to open 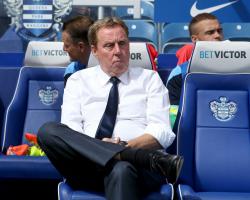 The west London club, promoted back to the top flight after winning the Sky Bet Championship play-off at Wembley, are second from bottom of the table, but only a point behind 17th-placed Crystal Palace.

QPR have been linked with a move for former England striker Jermain Defoe, who is with Toronto in the Major Soccer League.

Redknapp believes chairman Tony Fernandes will back him in the transfer market provided the Hoops are not way off the pace in the relegation scrap.

"We are trying, we felt we have to make sure we are still in there," Redknapp said on talkSPORT

"If you are cut adrift at Christmas, you don't want to be going and getting yourself into trouble, but if we are still in there with a chance, which I think we will be, then the chairman will go out and let us get one or two players who could make the difference for us.

"We have got one or two targets, and are just waiting to see if we can get them over the line."

QPR, who drew 2-2 at home with champions Manchester City before the international break, host Newcastle on Saturday, with the Magpies now very much on the up having at one time looked set for a survival battle themselves.

Redknapp added "I look at the table and think there are going to be seven or eight teams involved in that scrap.

"Burnley had a win last week, there is no-one cut adrift yet, it is too early, and if anyone could get back-to-back wins like Newcastle have done, it could all turn quickly.

"We brought a few new players in and it took them time to settle, but they are finding their feet at the club now.

"I think we we have deserved more points with the form we are in, but I would rather play poorly and pick up a few wins."