Ferdinand- Life on bench a comedown 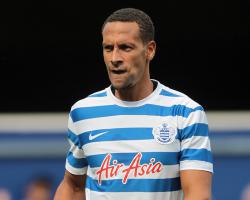 The former England captain penned a one-year deal with Rangers in the summer, reuniting with former boss Harry Redknapp after leaving Manchester United.

Having established himself as one of the Premier League's best ever defenders while at Old Trafford, few would have predicted the 36-year-old failing to make the grade at Loftus Road.

But fitness and a Football Association ban for Twitter comments mean he has been left him out of the first-team picture and on the bench.

"No footballer worth his salt likes sitting on the bench

So I would be lying if I said I'm perfectly OK about being left out of the QPR team recently," Ferdinand told the Sun.

"When you have enjoyed all the success of being at a club as big as Manchester United for more than a decade, there is no hiding the fact that my current circumstances are a bit of a comedown.

"But do not make the mistake of thinking I have any regrets about my move to Loftus Road - because I don't.

"I knew what I was getting myself into and knew I'd be at a club where you would mostly spend your time looking up at teams rather than down at those below you.

I'm realistic that, at the age of 36, that was never going to happen."